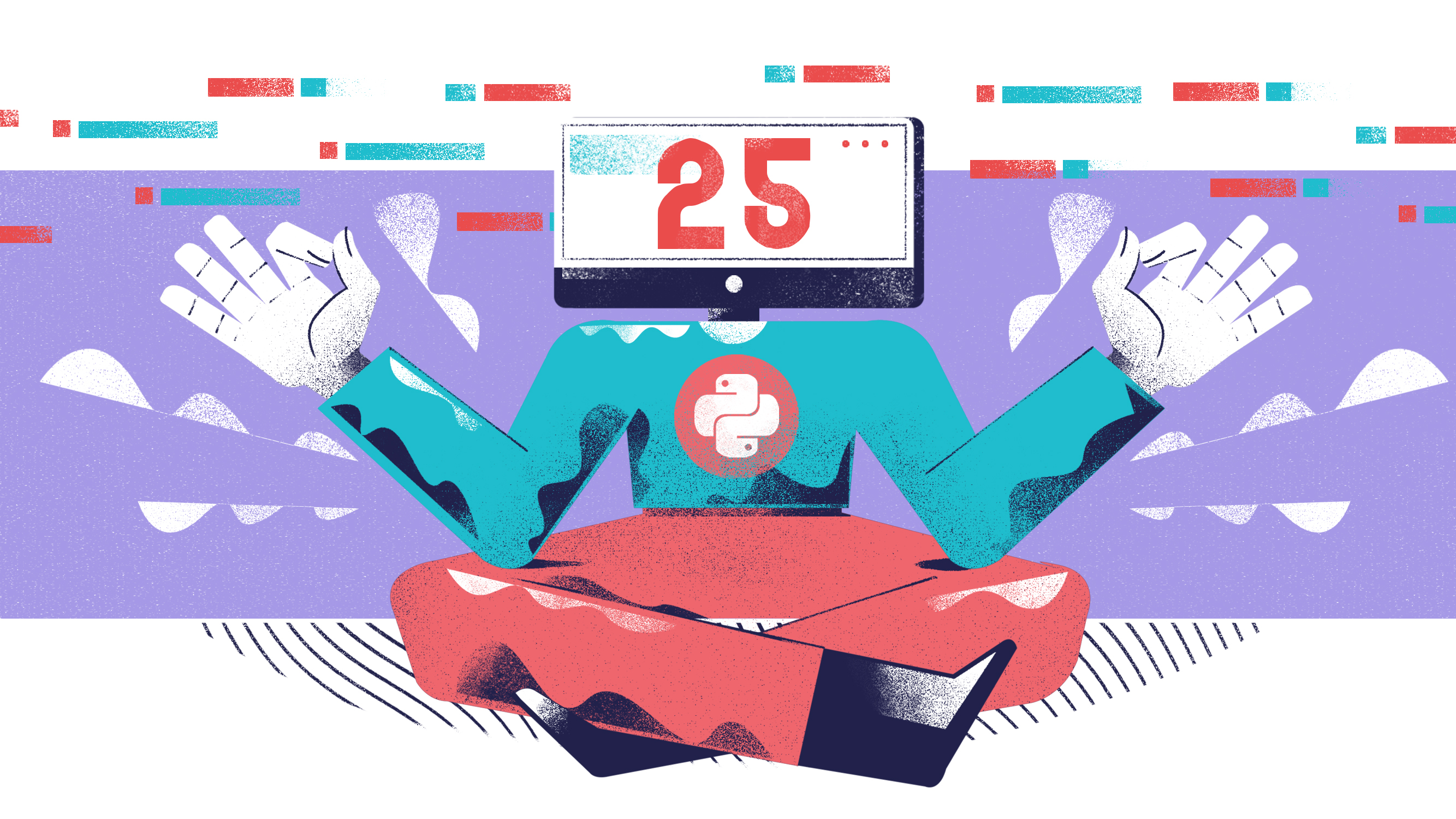 Welcome to day 25 of the 30 Days of Python series! Today we're going to be learning some more common patterns and tricks used by professional Python developers.

This is going to help us build on the idioms we've already learnt, so that we can make the jump to writing really professional looking code!

Before we dive into looking at any specific patterns, I just want to take a moment to talk about "Pythonic code". This is a term you're likely to hear a fair bit as you continue learning about Python.

There's a lot of confusion out there about what exactly "Pythonic" code is, but the term is actually fairly easy to define. Python code is said to be Pythonic when it's written in a way that adopts the idioms of the Python language, and which conforms to a certain set of stylistic principles.

An idiom is a language, dialect, or style of speaking peculiar to a people.

Let's look at English as an example. In English, we have the word, "goodbye", but native speakers of English rarely say, "goodbye". Instead, we favour things like, "cya", "bye", and "catch you later". Goodbye generally sounds a bit awkward and stilted in most situations.

The way we write our Python code is very much the same. There are ways of writing Python that make sense, and are perfectly correct in a functional sense, but which don't look quite right to Python "natives".

Writing Pythonic code is about writing code which does look right to these other Python developers.

With that in mind, let's learn about some of the things which will make us look more like true Pythonistas.

This is something we spoke about briefly back in day 5, but I think it's really worth reinforcing this pattern. We're also going to be building on this pattern in the following sections.

As a quick reminder, in Python every value has an associated truth value which determines whether it evaluates to True or False when we pass it to the bool function.

In general, values in Python evaluate to True, barring a small number of exceptions.

One important category of exceptions are empty sequences and collections, which includes things like strings, lists, range objects, dictionaries, etc.

The fact that every value can be considered as True or False gives us a lot of power, because we can use any value as a condition for things like while loops, or conditional statements.

For this reason, we generally never need to write code like this:

Instead, the more Pythonic approach would be to test the truth value of my_list. If the list is empty, it will evaluate to False, so we can use this to control the flow of the conditional statement.

This approach is also very useful for checking whether or not a function or method returned None.

There are situations where we have to check explicitly for some values instead, so be judicious about when to use this structure.

For example, if None is a value we're looking for specifically, we should check if the value is None or is not None, rather than checking truth values. This is because 0, False,  None, and many other are all going to appear the same from the perspective of truth values.

If you've been reading the additional resources, you've likely already encountered the and and or operators, but they're not something we've really covered in the series.

Their basic use in Python is to combine expressions to make compound conditions.

Here is the same example written with or:

In this sense, the operators are fairly straightforward. For an and condition to evaluate to truthy, both operands must be truthy. For an or condition, it's enough that either of the operands are truthy.

However, in Python and and or have a very interesting property. They don't evaluate to True and False: they instead evaluate to one of the operands.

In the case of and, we get the first operand back if that operand is falsy; otherwise, we get the second operand. Let's consider a few examples to see how this works.

If we use and as a condition in something like a conditional statement, this functions exactly like if and evaluated to True or False.

In cases where the the first operand is falsy, we already know that the expression can't be truthy, so we just give back the falsy values. This in turn is then evaluated to False.

If the first operand is truthy, we instead give back the second operand without bothering to check it. Why?

Let's look at some ways we can use this property.

Using or to replace falsy values

A common way to use or is to replace values which are falsy. For example, let's consider a case where we want to enter a default name when the user fails to provide one.

Using the techniques we learnt in the last section, we might be tempted do something like this:

However, we can use the or operator to cut this down to a single line like this:

Here we're saying assign the user input to name if it was truthy (i.e. not an empty string); otherwise, assign the string, "John Doe".

Using and to change how we handle return values

Using and is a lot less common, but there are some interesting things we can do with this operator as well.

Here we have two possible types of return value. We either get a float representing the result of the division, or we get None.

Let's say I want to test if the result of some division is an integer, using the is_integer method. I then want to inform the user whether or not the number is an integer.

Using conditional statements, we'd have to do something like this:

Using and, we can instead write something like this:

While I think it's an important one to know about, I wouldn't necessarily suggest you use this and approach, and I certainly wouldn't recommend you use it all the time. It has a far more limited use case than or.

Once you understand it, it's relatively easy to follow what's going on, but it's particularly opaque to people who aren't familiar with the idiom, and I think that often makes it a worse choice than using some combination of conditional statements and try statements.

Let's say we have a list, and we want to discard some values from that list. An example might be a case where we've somehow filtered a list, but we only want the first ten values.

This approach is quite verbose, and there's a lot of opportunity for typing errors here, because we're having to type the same variable name twice. If we had a few similar names, this could easily lead to a bug where we reference two different variables by mistake.

Incidentally, this is one reason to also prefer this:

Not only is this shorter, and more efficient, it's also more readable. It makes it very clear that we're deleting items from the positive_numbers list, whereas the slice approach obfuscated this a bit with an additional assignment.

Of course, there are cases where slicing is the correct solution. We don't always want to destroy the original collection, after all.

Check for multiple values using in

One thing I often see when reviewing student code is something like this:

This is a good idea. They're trying to catch lots of different ways the user might try to respond, so that the program is more accommodating of the users.

The approach, however, is extremely verbose, and there's a much better way of writing this kind of code.

If you want to check for multiple values, using the in keyword is much shorter and cleaner.

If after processing the string you're left with an empty string, the function should replace the empty string with "World" in the output.

Hint: You should look at the constants in the string module. Documentation can be found here.

You can find our solutions here.