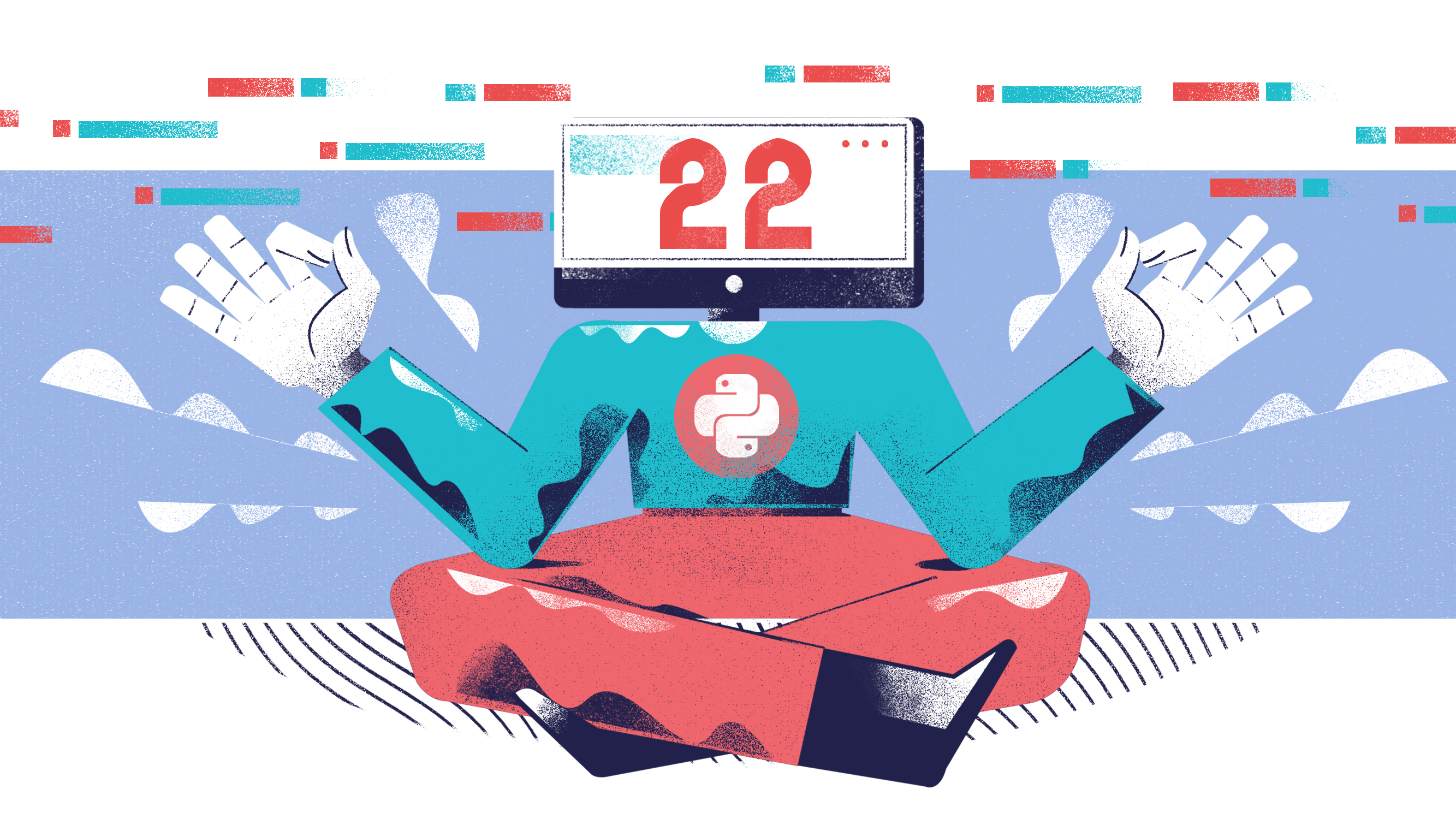 Welcome to week 3 of the 30 Days of Python series! Today we're going to be taking a look at iterators!

Though we've not encountered this term iterator, we've actually seen lots of iterators already. For example, any time we call zip, enumerate, map, or filter, what we get back is an iterator.

Today we're going to dive a little into what they are, and why they're important, as well as a few gotchas we need to watch out for.

Iterators have a technical definition in Python, but we haven't yet covered many of the concepts required to properly understand this definition. Despite this, we can still get a broad overview of what iterators are through some relatively intuitive concepts.

Let's start out by talking about iterables, since this is a term we've used a number of times throughout the series, and it's a related term.

An iterable is really any value we can iterate over with something like a for loop. We can also destructure iterables, and we can create collections from them by passing the value to functions like list or tuple.

Here are some of the iterable types we've encountered so far:

If we want a very broad stroke definition, an iterable is really just a thing we can get values out of one at a time.

One question we should probably be asking ourselves is, how do we get hold of those values? How does Python know what to give us?

The answer to this question, is that it uses iterators. If iterables are the things we can get values out of, iterators are the things which give us those values. They're the mechanism Python uses to extract values from iterables.

As we can see from our list of iterables, the iterators I mentioned in the introduction to this post are also iterables. In fact, all iterators are iterables.

There's a technical reason for this to do with how iterators are defined, but it also makes some intuitive sense.

When we want to get values from an iterable as part of some iteration, we're saying,

"Give me the iterator in charge of providing your values."

We then get put in touch with that iterator, and it starts releasing values to us, one at a time.

If we ask an iterator directly, it says,

"Actually, I'm in charge of releasing the values, so I can give you them."

Not all iterators retrieve values from another iterable. Many iterators spontaneously generate values for us instead.

There are plenty of examples of this kind of iterator in the itertools module.

This works because iterators are iterables (which means we can iterate over them to get the values we want), and iterators are capable of providing values to us without the aid of another iterator. All it requires is for an iterator to have an means of internally generating values, rather than providing a means for us to access values defined elsewhere.

Iterators have several important and useful properties that we should be aware of.

First of all, most iterators are lazy types, particularly those defined in the standard library. This means they don't bother calculating all of their values in advance. We've encountered this for some non-iterator types as well, like range objects.

Being lazy comes with some significant memory benefits, because we only have to keep the most recent value in memory. Once we're done using it for whatever it is we're doing, we can throw it away, potentially freeing up that memory.

There are also some potential savings in terms of computations as well, because it may be the case that we don't need every value that an iterator can provide. If we only care about the first 3 values, there's no need to figure out what the next 200 are.

These benefits don't come for free though: there are compromises involved.

First, it's often not possible to determine the length of a lazy type, because the number of items it contains may become apparent only after calculating those values.

For example, let's say we're trying to filter a list of words so that we only keep words starting with "a". If you're not familiar with filter and methodcaller, check out day 20.

It should be pretty clear that we can't determine the length of a_words until we actually performing the filtering operation. However, filter is going to wait until we ask it for values to calculate anything. It's therefore impossible for us to get any indication of how long a_words actually is.

In a similar vein, it's also impossible for us to readily see what values the filter object contains. In order to find out, we have to actually request the values from the iterator, and this can lead to some additional problems as we'll see in a moment.

This is a really important one to keep in mind, because it's a common "gotcha" that often trips up newer Python developers.

This can be easily demonstrated using our filter example above. Let's just use a for loop to iterate over the values and see what we have left after filtering.

So far so good. We get all of the words starting with "a" printed to the console.

Now what if we add another for loop to do the exact same thing?

We get the exact same output.

What we would usually expect here is for the names to print twice, but that's not what happens.

Let's instead try to turn a_words into a list after the for loop to see what's inside.

The reason this is happening is because there's nothing left to put into our new list after we've iterated over our iterator. The values have already been provided to us, and the iterator won't given them to us a second time.

This can often lead to problems if you try to see what's inside an iterator when checking your code, because by unpacking the iterator and printing its values, you're consuming the values. If you have code after the print call which relies on those values, you may get an unexpected exception or, at the very least, unintended behaviour.

Changes to mutable collections can affect an iterator

Let's use our filtering example once again.

This time we're going to create a_words from our filter, and then I'm going to make some modifications to the words list. We're then going to print a_words to see what effect this had, if any.

Despite the fact we've already created the filter iterator before modifying words, the new word still gets included in the filter.

This is another side effect of laziness, and it makes a fair bit of sense. filter hasn't actually done any filtering when we define a_words, and it doesn't store its own version of the list to grab its values from. It just references the one we already have in memory.

If we modify that list, and then we ask filter to filter values from the list after that change, it doesn't even know that new items were added. It doesn't really care. It's just going to keep giving us values until it runs out.

Manual iteration with the next function

Now that we have an idea about what iterators are and we know a little about their properties, let's turn to some interesting ways to use them.

One quite useful way we can work with iterators is through manual iteration. That is, requesting values from an iterator one at a time, without the aid of tools like unpacking, or for loops.

The way we request a new item from an iterator is using the next function. When we call next, it expects a reference to an iterator. This will not work for regular iterables!

To start, let's try to grab the first word in our words list that begins with "a".

Of course we can also pass the return value of next to print directly as well.

As we can see, we got back "anaconda", which is the first "a" word in the words list.

If we call next again, we get "anime": the second "a" word in words.

So, what is a practical application for this?

Remember the iris data from day 14? Originally, we used an approach like the one below to get the file data and extract the headers.

This approach worked fine, but it's not the best approach if this was a very large file for a couple of reasons:

We can avoid all of this by making use of iterators. It turns out that the open function already gives us back an iterator, so we don't have to do a lot to make this work.

Here we start by requesting the first line of the file from the iris_file iterator. We then process this string as usual and assign it to headers.

Remember that this consumes the value, so when we iterate over iris_file, we're only going to get line 2 onward.

Moreover, we only work with one line at a time, and we don't keep the line around after we're done with it. We just create the dictionary we need, and we throw the original string away in favour of a new one. This is extremely memory efficient compared to what we were doing before.

Depending on what we wanted to do with this data, there are ways to do all of our computations without ever having to create some collection to store all of the values.

Manual iteration is very useful, but we have to be a little careful, because we may encounter an exception called StopIteration. While not exactly an error, if we don't properly handle this exception, our program will still terminate.

We spoke a little about StopIteration in day 19, but not in great depth. Just as a quick reminder, the StopIteration exception is raised when an iterable has no more values left to give us when we iterate over it.

This exception is handled for us when we use a for loop, or when we destructure a collection, but not when we perform manual iteration.

For example, if we look again at our filter example, we will get a StopIteration exception raise if we try to request four items.

Because of this, it's a very good idea when performing manual iteration to catch any potential StopIteration exception using a try statement.

Write a program to create a schedule that lists which of your employees will lock up the shop on a given day over a 30 day period. You should list the day number, the employee name, and the day of the week. You can choose any employee to lock the shop on day 1, and you can also choose which day of the week day 1 corresponds to.

You should make use of the cycle function in the itertools module to create a repeating series of values. You can find documentation here.

Once you've finished with the exercises, you can check your solutions against ours here.